Fourteen-year-old Jack Lane became one of the first to benefit from the extension of Britain’s jab rollout today. He received his vaccination at Belfairs Academy in Leigh-on-Sea, Essex

Pfizer will push for its Covid vaccine to be approved for children as young as five, the company announced today — as Britain began injecting healthy 12 to 15-year-olds with the jab for the first time.

The pharmaceutical giant said its trial of around 2,000 children aged five to 11 found a low dose of the vaccine generated a strong immune response and threw up no safety concerns.

American officials are set to review the data in the coming weeks and decide whether to roll out the vaccine to pre-teens in October, with Pfizer also planning to seek authorisation in Europe and the UK.

Pfizer’s trial looked at antibody levels in the blood of primary school-aged children to estimate their immune response, unlike larger trials of older participants which compared Covid cases in the vaccine and groups.

A spokesperson said the company may later disclose vaccine efficacy from the trial but there had not been enough infections yet among the volunteers.

While the US is expected to open the vaccination programme to younger groups, at this stage the jab is unlikely to see the same sweeping approval in the UK, which only today started immunising healthy children aged 12 and above.

A single dose of Pfizer‘s vaccine is being used on Britons aged 12 to 15 in the hope that the roll-out will prevent further disruptions to their education, even though Uk officials say the direct health benefits are only ‘marginal’.

Parental consent is being sought but children can overrule parents who do not want them to get the jab if deemed ‘competent’, in a move that has caused controversy. More than 3million under-16s are eligible for the vaccines and ministers expect at least 60 per cent to take up the offer.

Jack Lane, 14, was one of the first to be vaccinated in England, as part of the extended rollout. After having his vaccine in Leigh-On-Sea in Essex this morning, he said: ‘I am proud to have had my vaccination so that I can remain in school and continue in my education – the jab was quick, easy, and painless.’ 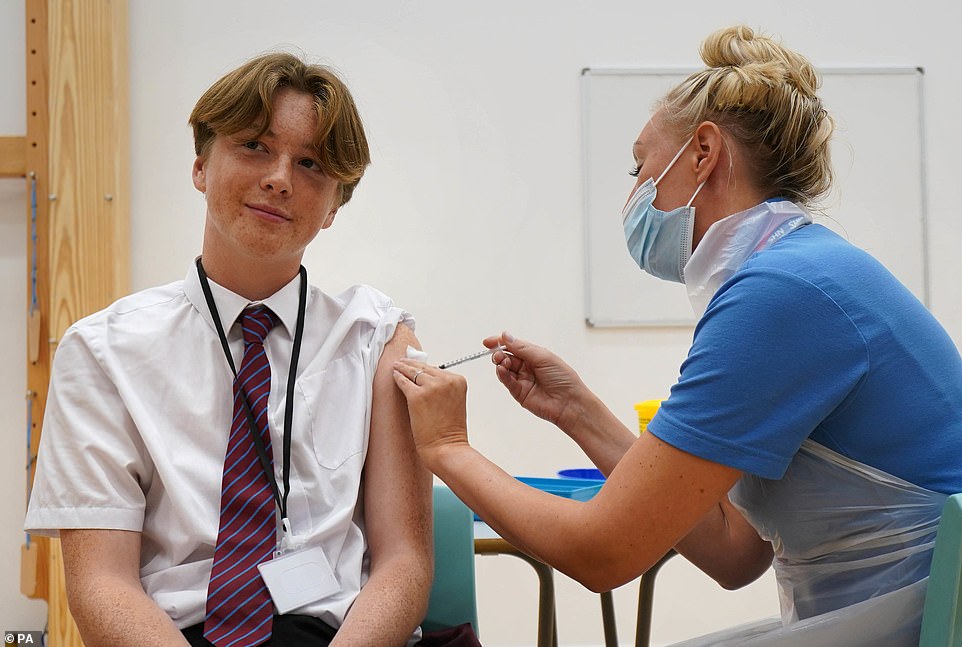 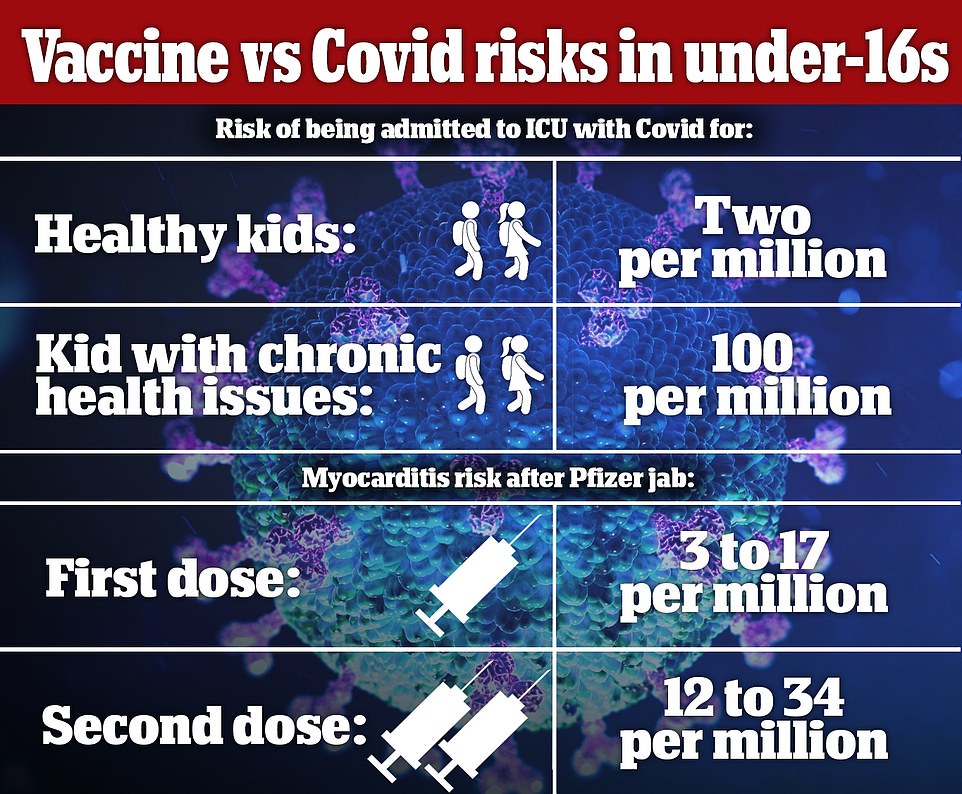 Earlier this month the JCVI said it could not recommend Covid jabs for healthy 12 to 15-year-olds because the direct benefit to their health was only marginal. It also looked at the risk of health inflammation – known as myocarditis – in young people given the Pfizer vaccine, which was still very small but slightly more common after a second dose 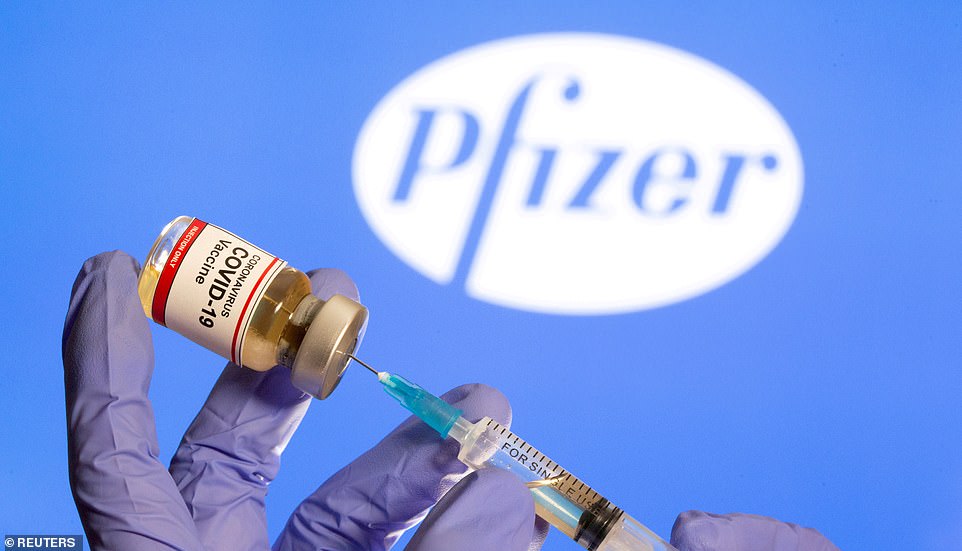 The vaccine made by Pfizer and its German partner BioNTech is currently available for anyone 12 and older. But the firms say the Delta variant and a sharp rise in paediatric cases in the US justified rolling the jab to younger groups.

For its latest, Pfizer gave 2,268 children between the ages of five and 11 two shots of a lower dose of vaccine. Youngsters were given 10 micrograms — a third of the dosage given to over-12s — in each of their two injections.

A press release today said that after their second dose, the children developed Covid-fighting antibody levels just as strong as teenagers and young adults.

The lower dosage also proved safe, with similar or fewer temporary side effects – such as sore arms, fever or achiness – that teens experience, the company said.

Pfizer’s Chief Executive Albert Bourla said: ‘We are eager to extend the protection afforded by the vaccine to this younger population, subject to regulatory authorization, especially as we track the spread of the Delta variant and the substantial threat it poses to children.

‘Since July, paediatric cases of Covid-19 have risen by about 240 per cent in the US – underscoring the public health need for vaccination.

The study isn’t large enough to detect any extremely rare side effects, such as the heart inflammation that affects fewer than one in 10,000 people and is more common after the second dose.

Pfizer is also trialling its vaccines on babies as young as six months and expects the results of that study to be available by winter, in a move likely to cause international controversy.

A full dose of Pfizer’s jab or half of Moderna’s is being offered to children in the UK.

They administered at some schools in England today and the rollout is due to begin in Scotland and Wales later this week.

In Northern Ireland, the head of the region’s vaccination programme said jabs are likely to be offered in schools from October.

The scientific community has been split over vaccinating healthy children against Covid because the virus poses such a low risk to them.

No10’s own advisory panel said earlier this month that immunising them would only provide ‘marginal’ benefit to their health, and not enough to advise a mass roll

But Professor Chris Whitty and the chief medical officers in the devolved nations came down in favour of expanding the inoculation drive after weighing up the wider benefits to children.

They said hundreds of thousands of school absences could be prevented and school closures averted if there was good uptake of the vaccines.

Health and Social Care Secretary Sajid Javid said: ‘It’s encouraging to see 12-15 year olds starting to get their vaccinations today – reflecting our ongoing commitment to protect young people from COVID-19 and minimise any disruption to their education.

‘The vaccine has made a significant difference in saving lives and reducing transmissions, and has met the strict standards of safety and effectiveness of our renowned medicines regulator for those aged 12 and over.

‘Today is the culmination of the fantastic preparation work the NHS has put in place to ensure vaccines can be given as safely and quickly as possible.’

The roll-out in England will primarily be done in schools through the in-school vaccination service teams that already carry out routine vaccine programmes for illnesses like flu.

Schools will be used as a site for administering the vaccines and distributing consent and information forms to pupils and guardians.

Teachers have been told not to hesitate in phoning police to deal with anti-Covid vaccine campaigners amid fears of protests at school gates over the rollout.

Dr Nikki Kanani, GP and deputy lead for the NHS Covid-19 Vaccination programme, said: ‘Alongside one of our busiest summers, NHS staff have been working closely with schools to ensure they are ready to deliver the vaccine to children aged 12-15 who are now eligible.

‘Following the decision by government, and building on the success of the NHS Covid-19 vaccination programme which has delivered over 77 million vaccinations, the NHS will now roll out to hundreds of schools over the next few days.

‘The vaccine is safe and effective and I would urge families to work closely with their schools based vaccination team to get their loved ones vaccinated when they are invited to protect themselves and their families ahead of the winter period.’ 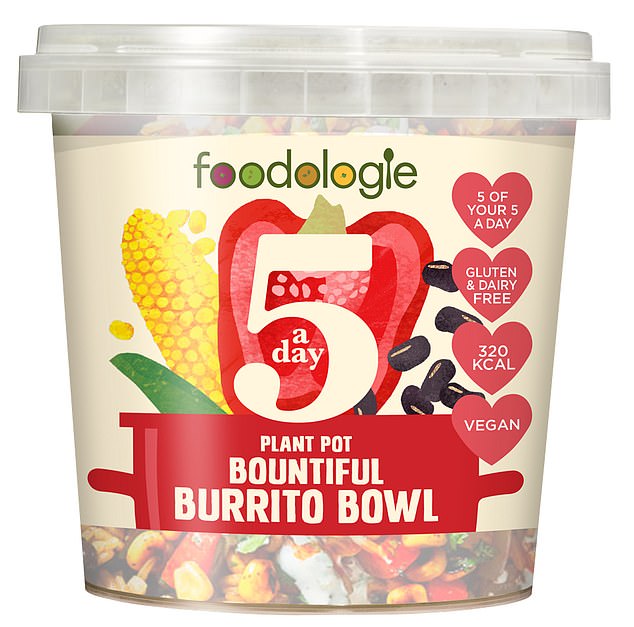 Which microwave meal has the most health appeal?

Fertility rates going down in Britain because of climate change warnings, experts say 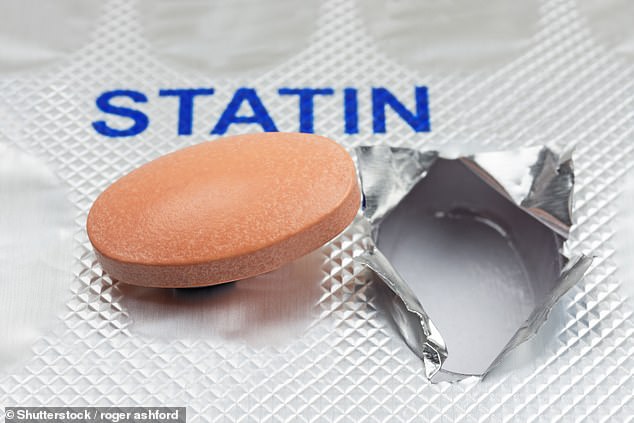 Taking statins could slash your risk of dying from Covid by up to 12%, study claims